His serekh name (Den, Dewen)  could mean "he who brings water" and this brings to mind the Scorpion king mace head which could show the king opening up new canals for irrigation.

Much of what we know about Den comes from ivory labels (20 such labels in all) and vessels that were found both in his tomb and the tombs of his officials at Abydos, Sakkara and Abu Rawash.

Den was the first to be called "King of Lower and Upper Egypt" (= King the the Two Lands) and the first king to wear the double crown - a picture of him wearing what became the traditional crown of Egyptian pharaohs was found in an ivory label in Sakkara - to be precise it was found in the tomb of Hemaka, who was the chacellor of the king in Lower Egypt. Also his birth name, Khasty, refers to him being a king of a unified land. Khasty means "He of the two deserts".

Interestingly enough his serekh name is written on the "First smiting of the east" -label (more below) with the already traditional Horus on top, but also the Seth animal on a standard. Now Seth and Horus were enemies, but Seth was also the god of Deshret, the red land, the desert.

Other official rituals that were considered ma' at, or the right way of doing things, are attributed to Den's rule as far as we know.

For example the heb sed ritual: the king was supposed to perform a run between ritual stele as part of the celebrations, and now this ritual was shown for the first time in an ivory label found in Den's tomb in Abydos. The ritual may have existed earlier, of course, but no record of its occurrence has been found from the reigns of kings preceding Den. An ebony label showing Den at his heb sed was attached to an oil jar in his tomb. 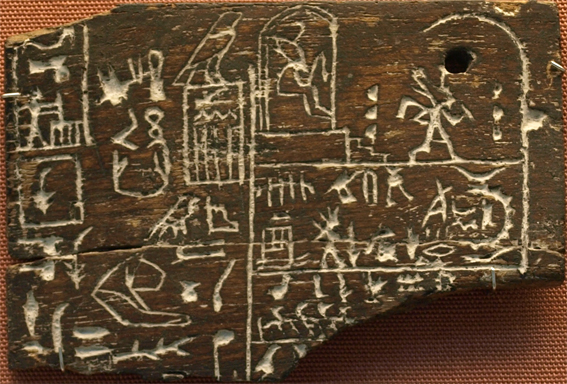 "EbonyLabelOfDen-BritishMuseum-August19-08" by CaptMondo - Own work (photo). Licensed under CC BY 2.5 via Commons.

Another example of the innovations attributed to king Den's reign was the standardized writing of numbers in hieroglyphs. Now this may not sound like much, but imagine living in a world were you would not have 1, 2, 3… And lets say you were supposed to collect taxes. How easy would that be without using standardized numbers others would understand as well?

The spells in the Book of the Dead were also attributed to Den's reign.

Den was also the first king of Egypt to be shown in the rock reliefs in Sinai. One hippopotamus ivory labels tells about the "First Smiting of the East" which probably meant Sinai and its Iuntju-people, "people with hunting bows" aka the Bedouin tribes of Sinai. It seems to be so that he brought was spoils back home with him, including female prisoners to his harem. 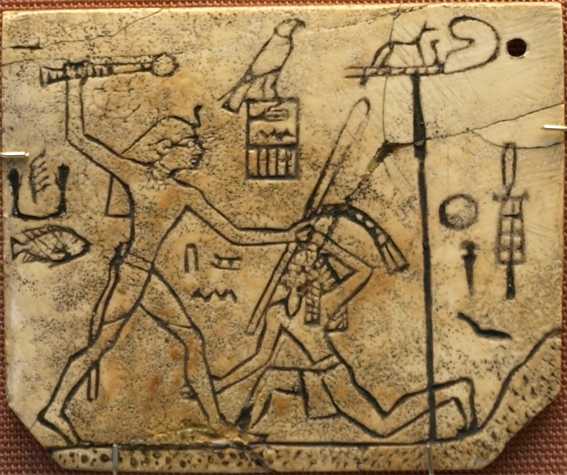 "IvoryLabelOfDen-BritishMuseum-August19-08" by CaptMondo - Oma teos (photo). Licensed under CC BY 2.5 via Wikimedia Commons.

You can see the label at British Museum

The reign of king Den was a prosperous one and he was well respected by his successors. There are different versions about the length of his reign. Manetho gave him 20 years of the throne, but the more believable Palermo Stone (which was created much closer to Den's time) gave him a reign of 42 years.

The fragments of the Palermo stone tell us a lot about the events of Den's reign: building projects, hunting trips, smiting of foreign people, making of statues, royal visits, building of canals ("He who brings water"). These exact years of these activities are clearly marked, and the last note is from the regnal year 41.

He was obviously rather young when his father Djet died, and his mother Meritneith ruled for him at the beginning of his reign. Obviously Den appreciated his mother greatly, as he arranged her burial in Abydos in a large tomb of royal proportions and arranged for her mortuary cult to continue.

We know some of king Den's queens by name: Nakht-Neith, Semat, and perhaps Qua-Neith. One queen is buried in Giza in a tomb that was actually larger than Den's own, but we do not know her name. This is an interesting trend of the times - women having as big or even bigger tombs than the pharaohs.

After Den's death he was succeeded by Anedjib, and Semerkhet. 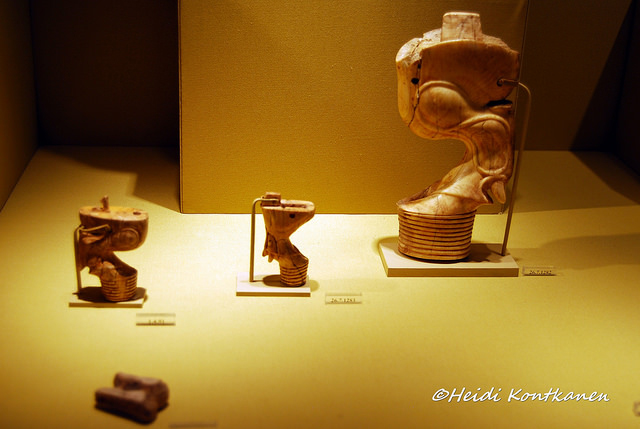 Like his predecessors, king Den was buried in Abydos in an area we know today as Umm el-Qaab. His tomb is known as "Tomb T". And in line with his whole reign, new innovations were used in the building of his tomb as well. Before this a tomb was filled from above; the tomb was a "hole in the ground" and once the deceased had been lowered to his/ her tomb, it was covered.

Now, however, Den changed this - a stone staircase was built that led to the tomb. Another novelty was that the floor of the tomb was made of hard stone, namely red and black granite.  The dead king was carried to his tomb using the staircase, and after this  the burial chamber was blocked with a portcullis. Entrance to the stairway was closed with a wooden door.

Like his predecessors, Den also had subsidiary burials around his tomb - 136 in all, both men and women. They were buried at the same time as the king, and the were probably strangled. An interesting detail was the stela of a dwarf named Ser-Inpu - dwarfs were highly valued in ancient Egypt, and a wnted addition to a king's court.

Seal impressions from Den's tomb are the first official list of kings in ancient Egypt found so far.

1. King Den was the first king to wear

2. What traditional ritual Den was shown performing for the first time?

4. What was the new architectural feature in tombs Den introduced?

Back to Homepage from King Den Facts

Thank you, Heidi Kontkanen, for the permission to use your photo of furniture legs from the tomb of Den.