I was typing my article about king Semerkhet, enjoying the uninterrupted writing time. Or so I thought.

”What are you writing about?”

Mr. Mummific had quietly appeared next to me.

“Hmm? Oh, I am writing about king Semerkhet,” I said.

“Oh, him. My friend Neferit is not too fond of him.”

I turned to look at him, just in time to see him picking his nose. Little specks of… something fell of the carpet.

“Eww… Please don’t do that! Now I have to vacuum the carpet.”

“When I say I need to vacuum, it means I take this machine we call vacuum cleaner. Or a hoover. It is in the cleaning closet.  It sucks air into it and with the air the dirt from the floor.”

“How does it such the dust? With its mouth?”

“No… It has something that resembles an elephant’s trunk.”

The thought of the havoc the ancient pharaoh could do with a modern vacuum cleaner was not a pleasant one. For all I knew Mummific might suck himself into the cleaner. I wasn’t sure he would survive that. No matter how much his Mrs rewrapped him, she could not glue loose bones together. No, better change the subject.

“Who was Neferit?” I asked.

“Who IS Neferit,” Mummific corrected me and thankfully took his finger out of his nose.

“My friend. He was an official of king Semerkhet. A dwarf as you call the short-legged and –armed ones.”

“A dwarf? Ok, in the service of king Semerkhet?”

“But he did not like king Semerkhet? Why is that? I thought dwarfs were highly appreciated in ancient Egyptian court? They were considered almost divine, weren’t they?”

“Indeed they were – and this is what Neferit thought too. He had the good life with the king – until he died. Semerkhet I mean. The king was not very old, and he appeared healthy. So you would expect a long reign. ”

“And it wasn’t…” I had just researched king Semerkhet and it was estimated he ruled for eight years.

“It wasn’t. Neferit had acquainted Semerkhet when he still was a priest. They were best pals, if you will. Neferit danced for the goddesses…”

“Well Nekhbet and Wadjet, of course! Who else?” Mummific looked at me like I had lost my marbles.

“Who else indeed… Silly me…”

“But anyway. Things happened and Semerkhet suddenly was king.”

“Well, let us just say that no one expected him to become king,” Mummific said and did not elaborate, “But suddenly he was and he started building his name with great vigor. Building projects and all that. Only just as he was well into his kingship years, he suddenly fell down dead.”

“What happened to him? Why did he die?”

Yes, it seemed to be so that no king of Egypt wanted anyone to know about their un-successes (Mummific’s word, not mine).

“So he died. And Neferit was not happy about it?”

“Indeed he was not. He was looking forward to years of comfortable life in the royal court, but Semerkhet had decreed that he wanted his court to be buried with him. And so Neferit was killed too. He would have wanted to keep on living for a while yet. Not to mention he was made to drink poison to make him die. Not a pleasant way to go. So even though Semerkhet has tried to explain to Neferit that it was the way things were done back then, he has never really forgiven the king. Neferit greets Semerkhet if he sees him, as he is a polite man, but that’s about it.”

He seemed to lose interest on the matter and walked away. I should have known it was too silent – if you did not hear Mummific doing something or talking, he was up to some mischief. But I kept on typing for a while until a loud crash from the hall alerted me to the fact Mummific had opened the cleaning closet door and tried to pull the hoover out. The end result was a mummy under the hoover, with bottles of detergent and cleaning liquids around him.

Thankfully he had managed to hold the hoover so that he was squashed, and I saved him from under it, scolding him for his stupidity. He took offense and walked through the false door to the afterlife, leaving me to clean the mess. But while I was at it, I decided to vacuum the apartment. The hoover and I are not the best of friends, but as it was already out of the closet, I decided it was time to end the party of the dust balls behind the couch. 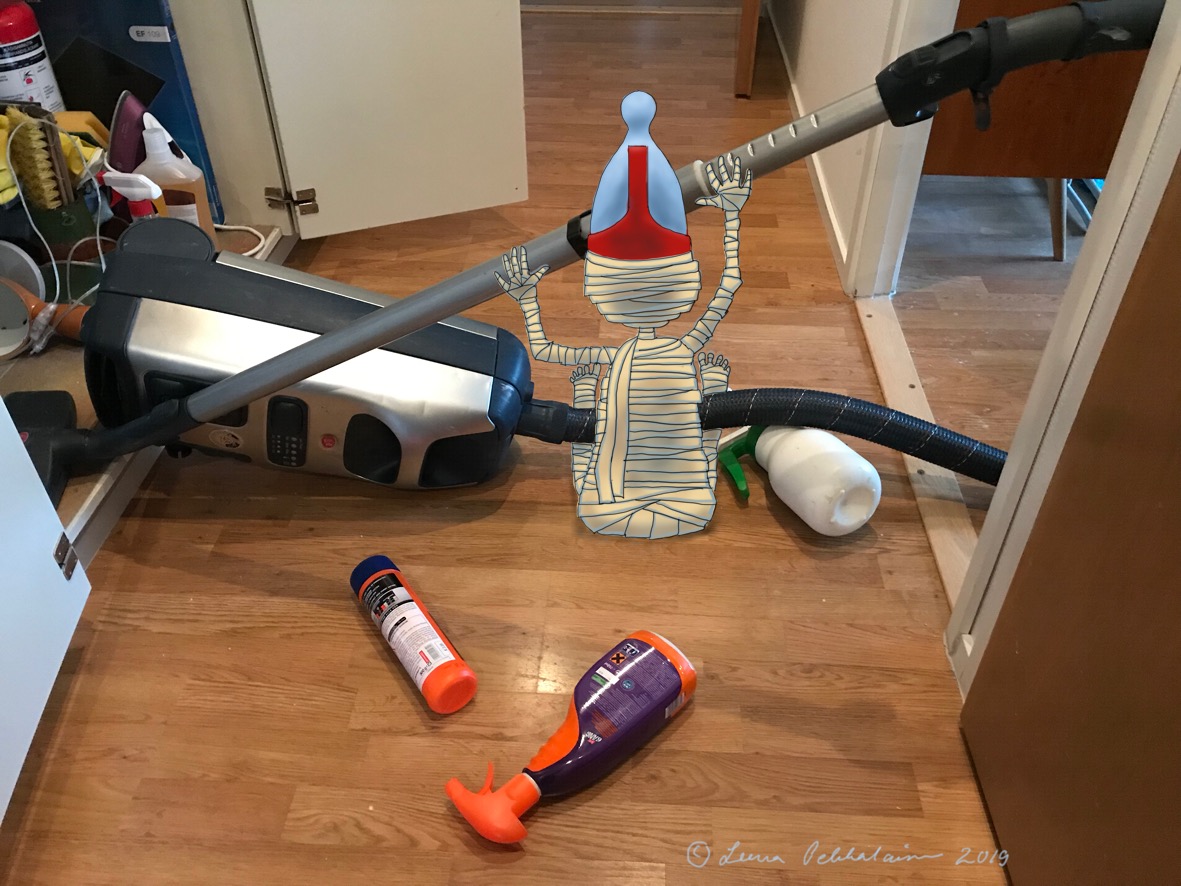 Mr Mummific and the hoover