I sat there one evening, after writing an essay about ancient Egypt. (At the time I studied Egyptology at the University of Manchester.)

I felt like my brains needed a break, and as I am an artist, I took my sketchbook and a pen and started doodling. I had been reading about mummification, and perhaps because of this my drawing soon began to look a lot like a mummy. 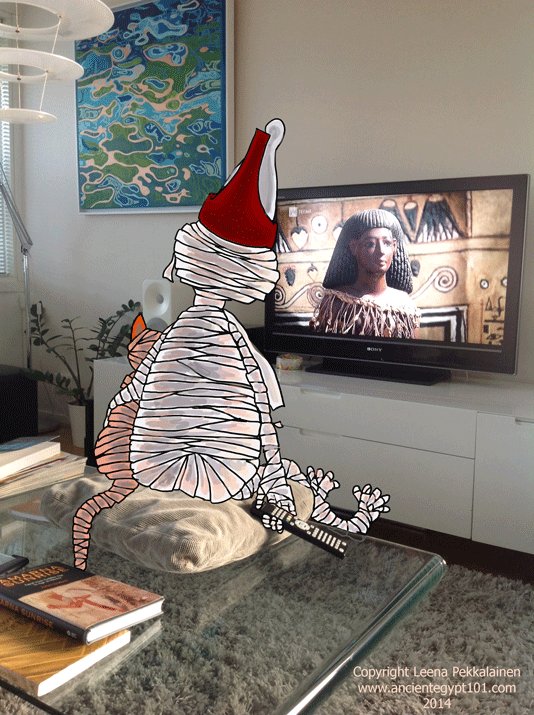 But not just any mummy, no. This was a little cheeky looking fellow with a Pharaoh’s crown on his head. He was smiling an almost toothless smile from the paper and I knew there was magic there… This was not just a drawing - I am sure he winked his eye at me, and I heard him say ”Mummific!”, all eager to look around in the modern world. 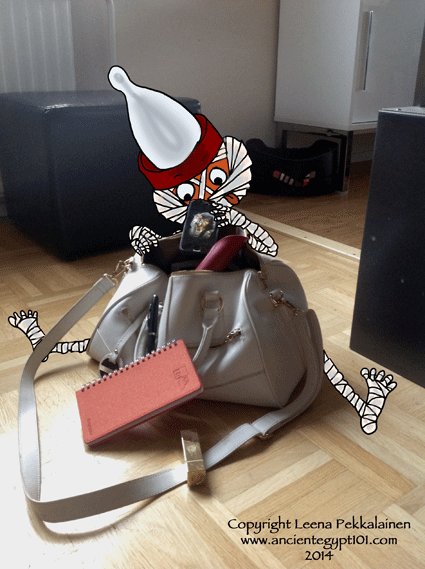 Which is how he got his name. Mr Mummific. He never revealed his real name to me, just said his tomb was not found yet. Not quite sure if he is telling the truth. I’m never sure when he is trying to pull my leg… Egyptians have a tendency to do so, just you ask Herodotus…

In time I drew more pictures of him, and a little cat appeared as his companion.

(Mummific told me the cat's name is Ta-Miu, and I have strong suspicion she was the beloved cat of prince Tuthmosis, the brother of Akhenaten... At least the names match, and the kitty in question is mummified with great care.)

With time I have noticed he takes great interest in our modern life, and we haven't exactly managed to avoid small catastrophes either. I have lifted cats off chandeliers (do not give coffee to mummies...), and dried a mummy with a hair dryer in the sink as a result of his experiments with the faucet, and if I don't take care to hide my markers, he makes a living graffiti of himself. 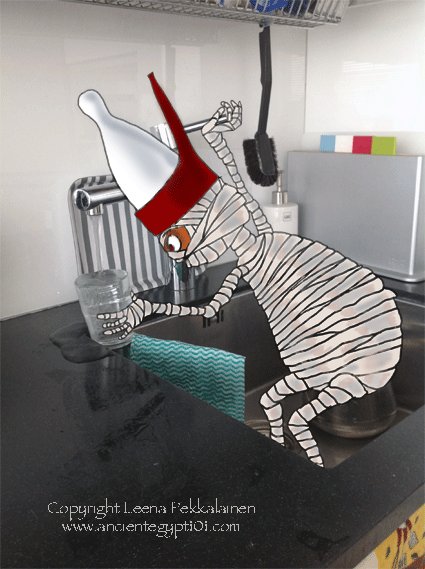 One day he suggested I would help him create a scroll where he could tell about life in Egypt in ancient times. And not only write it - he wanted me to illustrate it as well.

I had to say yes, because if I hadn't I am sure he would have tried to do this himself otherwise - with a marker, directly to my computer screen. He could not understand you do not need to create directly on the screen. Maybe typing with bandaged fingers is a bit difficult.(He considers markers to be a thing of wonder, after having watched me draw with them)

He got very exited when I told that on a computer I could create a scroll that could be read from all over the world at the same time. There was no stopping him after that.

So here’s Mr Mummific’s Scrolls for you to read - easy articles about Ancient Egypt. I will be his scribe, and after having written down a few pages I can say he sure has his opinions about all things Egyptian… And there’s no point in disagreeing with him. Pharaohs were absolute rulers in their own time, and could say what ever they wished, and it was so. Mr Mummific is not quite convinced it is not so anymore…

Oh well, read and have fun!