King Anedjib ruled around 2930 BC. His name means ”safe is his heart”. He was the first king to have both the nebty (Two Ladies) and the news-bity (He of the Sedge and the Bee) names. Nesw-bity name was already in use by Den. He also introduced a whole new royal title: Nebuy or Two Lords, written as two falcons on a short standard.

He seems to have come from the area of This near Abydos – he is mentioned as a Thinite king in the Saqqara king list.

As with many kings of the times, his genealogy is not certain.

There is some controversy regarding the length of his rule. According to Manetho he ruled for 26 years. The Turin king list gives him a rule of 74 years. Most likely he ruled about 8 to 10 years on his own and might have been a coregent of with Den, who probably was his father. His mother may have been Seshemetka. He has not left much in the lines of written records about his rule which would support the theory of a shorter reign. Also there is speculation that Anedjib was Den’s rival and erased Den’s name after rising to power.

Of Anedjib’s buildings works it is known he built a new fortress “Horus golden of body” and a new royal residence “Horus, starry of body”.

Seal impressions carrying his name have been found in the tombs of Nebetka in Saqqara, a tomb in Helwan and tomb in Abu Rowash. 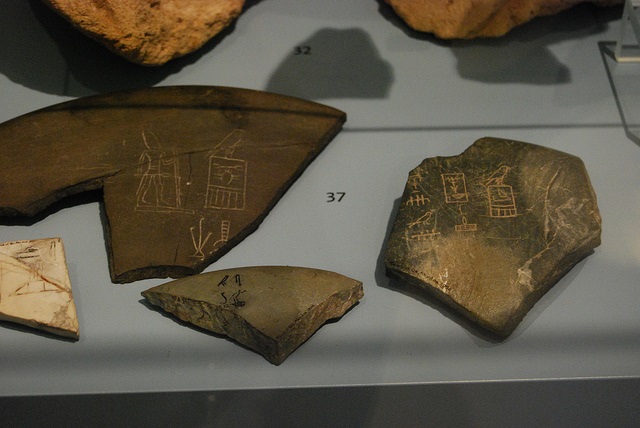 Anedjib’s wife may have been Betrest, who is thought to be the mother of Anedjib’s successor Semerkhet. It is not certain if Anedjib is his father. Betrest may also have been the wife of Den, and so Semerkhet may have been Anedjib’s half brother. Little is known of their relationship, and it has been speculated that Semerkhet usurped the crown from Anedjib. Semerkhet’s name is not mentioned Saqqara king list.

Anedjib celebrated two heb seds. The scenes depicting this celebration were probably taken from Den’s tomb and later re-inscribed to Anedjib. It could be he never had a heb sed festival of his own, as he may have been rather old when ascending the throne.  His tomb is rather small, which seems to support a short reign as well.  If he had a heb sed, he may have held it very soon after becoming king.

Anedjib’s rule was not altogether peaceful – it is known he put down revolts in Lower Egypt. His end may have been violent.

Anedjib was buried what is today called Tomb X in Umm el-Qa´ab in Abydos. It is situated northwest of Merytneith’s tomb. It is surrounded by 64 subsidiary burials or servants and court officials.  Despite its small size the tomb had luxury feature -  it had a chamber that was made entirely of wood. Wood was a rarity in ancient Egypt and it was a sign of prestige to be able to build anything out of it.

3. What supports the theory of king Anedjeb's short reign?

4. What was the luxury feature of king Anedjib's tomb ?

Back to Homepage from King Anedjib facts

Thank you, Heidi Kontkanen, for the permission to use your photo of Anedjib's serekh.