King Scorpion is another elusive king of ancient Egypt. Very little is know of him - and it has been suggested he was actually none other than the famous king Narmer, and the Scorpion symbol that we take to represent his name is actually a title. During these early stages of dynastic history Egypt was divided into small kingdoms, which fought each other, so perhaps he was a contemporary and rival king of Narmer.

The famous Scorpion King  macehead is really the only evidence of his existence.  It resembles the mace head of king Narmer. It was found in the ancient city of Nekhen. 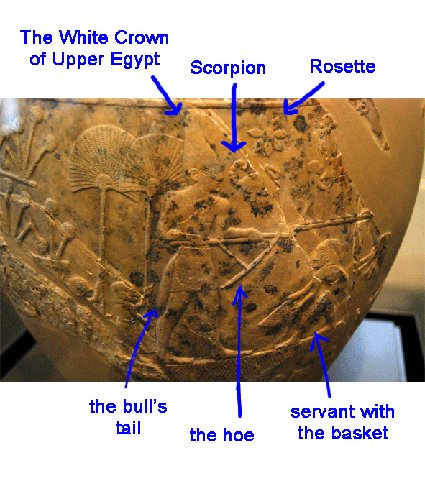 In the mace head we see the figure of a king, who wears the "pin bowl" crown of Upper Egypt. Officially it was called the White Crown. He holds in his hands a tool that looks like a hoe or a mattock. What exactly he is doing with the hoe is again a matter of dicussion. He could be opening a canal to let the Nile waters reach the fields. Another explanation is that he is cutting the foundations of a temple - a very important ancient ritual.

In front of the king is a servant holding a basket, which may have contained seeds.  This might refer to the ritual being related to agriculture and planting. The pharaoh was always seen to symbolize the fertility of the land, to which the waters of the Nile were crucial. And so this may well have been a depiction of opening the canal for agriculture.

Another explanation is that the king is establishing his rule to the land he has conquered. This might not contradict the opening of the canal -theory, with its connections to the fertility of the land, and the king's divine role in it.  What supports the establishing his rule, are the rekhyt-birds hanging from the standards in the macehead. These birds (which are actyally lapwings) symbolized the common people through the Egyptian history, and the fact that they are shown hanging from their necks, would speak in favor of them symbolizing the people the king had conquered.  Another explanation is  that the birds may have represented foreigners, and that the macehead told about king Scorpion's victory over foreigners.

There is the symbol of a seven-leafed rosette and a scorpion in front of the king's face.  This kind of rosette identified the king at the time. And the sign of the scorpion, "srqt", told his name.

He is wearing a full ceremonial outfit - you can see a bull's tail hanging at the back from his belt. The bull was an important symbol of royal power.

There is an interesting article by Winifred Needler about a rock carving found in Gebel Sheikh Suliman (the Second Cataract area), which might suggest King Scorpion led a military expedition to Wawat (Nubia). The link to the article is at the end of the page.

Where exactly was this king buried? It is not known for certain, but in Abydos a tomb was found with several ivory tags which were decorated with scorpion figures. As kings at the time were buried in Abydos, the tomb in question (officially Tomb B50) may be the last resting place of King Scorpion. Still, we cannt be certain as there is no conclusive evidence.

1. Which symbol identified someone as king in very early Dynastic Egypt?

2. What was the "pin bowl" crown of a king officially called

3. What did the rekhyt-bird  most likely symbolize?

4. What was attached to the king's belt?

Back to Homepage from King Scorpion Facts

If you wish to see the mace head in real life, visit the Asmolean Museum.

The article about the Scorpion rock drawing: