There aren't that many King Ka facts to go by - he is another elusive king from the very beginnings of the Dynastic age of Egypt (around 3200 BC). The sheer amount of time that has passed since he lived, has effectively erased physical evidence of him, yet enough remain for us to know he existed.

Even the way King Ka's name was written is uncertain. His name is written inside a serekh - a stylized palace facade on top of which a hawk, the symbol of the king, is perched. He was the first king to write his name this way, and thus the kings' names were written for many years to come.

The sign "ka" is written with stylized hands reaching upwards. This is how King Ka's name was found written on pots and seals found in his tomb. But - his name was also written with the hands pointed downwards This symbol reads "sekhen" and can be translated "to embrace".

Which one is the correct form, then? Hands up or hands down? The historians are not quite sure, and so many have chosen to simply call him "King Arms" - the arms are there in any case, so historians know quickly whom they are talking about.

King Ka was the successor of Iry-Hor, and his successor was probably King Narmer, of King Scorpion. 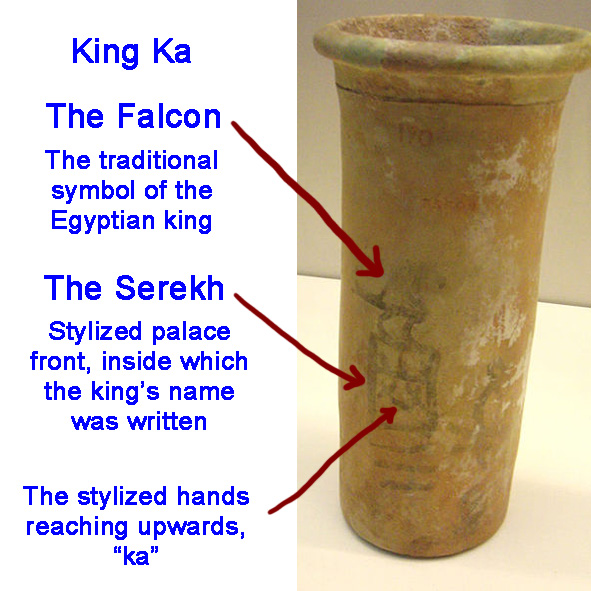 The symbols in King Ka's name

King Ka's tomb was found in Abydos, near the tombs of Iry-Hor and Narmer. This tells they were probably near each other in chronological order.

The necropolis where King Ka's tomb was found, is called Umm el-Qa'ab, or "Mother of Pots". Sounds a bit strange, if you don't know the place in question is so full of pot sherds from ancient offerings, that they have litter the whole area. You cannot step anywhere without hearing their crunch under your feet. (A sound any archaeologists does not want to hear...)

The tomb in question was rather small, if you compare it to the later royal tombs, as it had only two chambers. It was certain this was his tomb, because the inscriptions bearing his name, number over forty.

2. The king's name was written inside a

3. The bird over the serekh was

4. King Ka was buried at

Back to Homepage from King Ka Facts

The modified picture of King Ka vase from British Museum was taken from Wikimedia commons.