”The Scorpion king…” I flipped through my books about pharaohs. ”Not much there, except this beautiful mace head…”

”Hmm….?” Mr Mummific peeked from my side.

I showed him a picture of the famous ”Scorpion Macehead”. There the king was holding something that looked like a hoe or a mattock.

”He is dressed for ritual,” Mr Mummific nodded next to me, ”You see the bull’s tail?”

Yes, looking closely I noticed the king had a bull’s tail attached to his belt. In front of him stood man holding a basket. 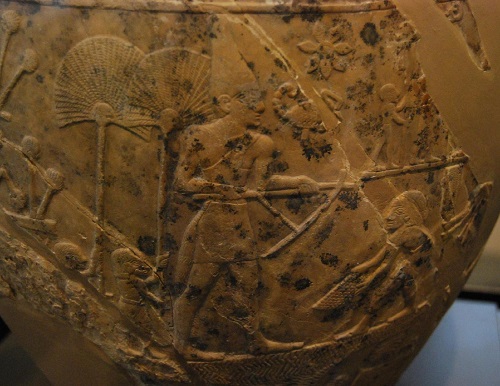 ”So what is the Scorpion King doing? They suspect he is opening a canal to let the water of the Nile to reach the fields from the dykes… Or that he is founding a temple… You know, cutting the foundations for the temple.”

My musings were interrupted by a clicking noise. Click-click-click… I turned and saw Mr Mummific gleefully clicking away with my best ball-point pen - the one I had got as a Christmas present. Not a cheap pen to say the least. I rescued the object in question from the mummy, careful not to break his fingers (he is a rather dry person, and the procedure felt like entangling the pen from a dry bush….). He stared at me insulted - after all - he was the king, and I should have been the subject.  And so - all the modern gadgets were fun stuff he could inspect and break if he felt like it.

”Would you concentrate, please!” I asked, ”It is you who wanted to write these stories for us, so I would appreciate your attention! If you don’t want to do this, I have plenty of other things to work at.”

”Hmph…” Mr Mummific harrumphed, which caused a little cloud of dust to land on my keyboard. I blew it away. ”Just like my Mrs…”

”Please?” sometimes the little pharaoh’s ego felt very alive, so I figured I'd better give in first, or nothing would ever get written about the Scorpion King.

”Very well. So you mean what is he doing there? Look at the rekhyt-birds there…” A wrapped finger tapped the book and I looked at the poles above the king. Each had a bird-like creature hanging from it - and the rope they were hanging from was tied around their necks…

”Ewww… What’s that? Has he killed them?”

”They symbolize the people he has conquered. The rekhyt bird is a symbol for common people. So there has been fighting and he has conquered them. Behind him are fan-bearers who waft the breath of life to his nostrils. Before his face is a seven-petalled flower and a scorpion…”

”What do they mean?”

”How should I know? He lived long before I did. You called him Scorpion king, so let him be that. ” Mr Mummific seemed a bit annoyed he did not know.

the ritual of scorpion king

”And what is the ritual he is performing?” I turned his attention to other things before he would walk through his false door and back to Duat.

”I’d say he is establishing his land, his capital, his kingdom. Upper Egypt  as you call it. After conquering it from these people whom the rekhyts symbolize.”

”No, for some reason he cannot be found… But then again, the Afterlife is a rather big place. If you want to get lost there, you can. There are so many people there, thousands of years’ worth of dead people.  Some people choose to stay hidden. Bad marriages, old quarrels, mother-in-laws… You know. Maybe he had an especially horrible Great Royal Wife. It can happen, you know. Especially when such a lady realizes no one can take the title away from them anymore. The GRF’s have established a club, actually, a very closed and snobbish club…”

Ta Miu appeared from behind the corner with one of my own cats and caught Mr Mummific’s attention.

Ta Miu meowed with a raspy voice and looked hungry the way all cats do - obviously it did not matter if the feline in question was dead or alive. My cat of course joined the chorus. In matters of food cats were of the same opinion - there was never enough food.

”Lets go get you some mice!” Mr Mummific patted the cat on the head, his attention turned away from ancient kings.

They disappeared through the self-made false door I had drawn on one of our doors. Egyptian dead could walk through them to afterlife and to their own tombs. I had not tried using it - I would just bang my nose on the door. Or worse - I would succeed and find myself in an ancient tomb and maybe not know how to get back.

I had of course asked what a mummified cat could eat, and the answer had been preceded by an incredulous look from Mr Mummific’s round eyes.

”Well, mummified mice, of course! Don’t you remember all the animal mummies we made through all our years in ancient Kemet? There are plenty of mice for the cats.”

But of course. How silly of me.  Didn’t want to disturb the logic by asking what happened to the mice if their mummified remains were eaten.  Some things you don’t want to dig too deep.

Well, it seemed there would be nothing more to say about Scorpion King, so I saved what I had written and closed the computer. Time to feed the cats…

(Later on we continued writing about ancient Egyptian kings, Narmer being the next one.)

Back to Homepage from King Scorpion