”All righty then. Now we move on to the king Ka… Or is it Sekhen?”,  I interrupted the rather vivid suggestion Mr Mummific was just formulating regarding the punishment of tomb robbers in the afterlife.

It took a little while for Mr Mummific to return to the present reality as he was in the midst of formulating an especially impressive curse on wretched tomb-robbers. But he managed to calm down enough to return to the writing at hand.

”You really call him that?”

”Yes. As a result he is now facing a bit of a dilemma… No one greets him respectfully with words anymore. People just wave their hands. Arms, you see?”

”Erm… yes…” I watched Mr Mummific laughing at the joke. He made strange dry hissing and puffing noises and shook with laughter.

”And that means anyone can wave their hand at him. Say ’hi’, so to speak. And you don’t really talk to a ruler like that, now do you? So if he wishes to return to the proper way of addressing him, he’d better make up his mind about his name.”

”And he also was buried in Abydos…  In the Umm el-Qa'ab necropolis." 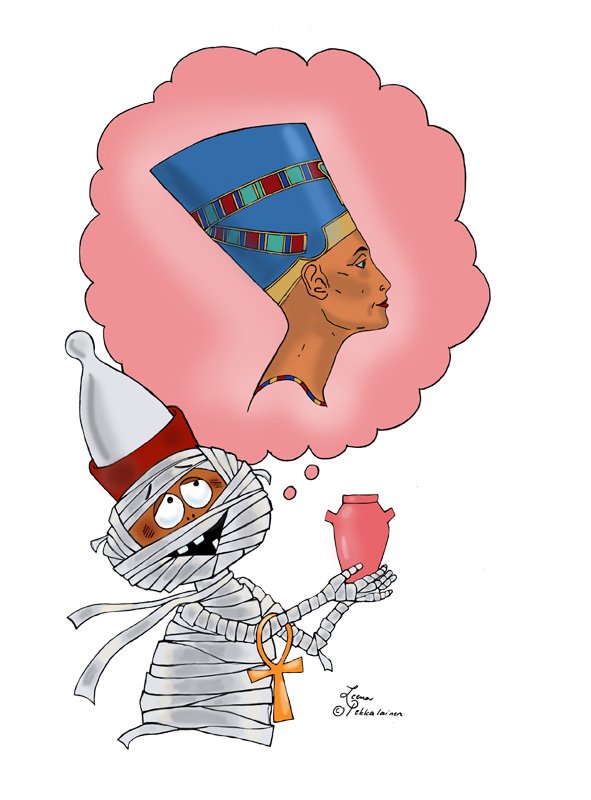 Mr Mummific offering the hieroglyph of the heart to Nefertiti

When I got no real answer from Mummific, I glanced at him only to see he had taken one of my Egyptology books and was reading it with a rather cheeky glint in his eyes.  When he turned the book I could see it was about Nefertiti. No point in continuing the discussion any more. He was all absorbed in admiring his Beauty of all Beauties as he called her. Despite the fact that Nefertari occasionally rose to Nr 1 in Mr Mummific’s list. Were the ladies in question aware of their battle for the most beautiful lady in Mummific’s list, I had no idea. So I just saved what I had written and returned to my Egyptology essays.

(The next king we talked about was King Scorpion.)

Back to Homepage from King Ka

The photo of the Ka-vase at the British Museum: